The first Tritium School organised by the TRANSAT project took place at the Jožef Stefan Institute, in Ljubljana (Slovenia), from 25-28 March 2019. After a warm welcome from Jadran Lenarčič (director of the JSI) and Christian Grisolia (coordinator of the TRANSAT project), experts in the field of fusion and fission from around the world participated and attended lectures on different topics related to tritium. In total, the first edition of the School gathered 66 participants who attended 17 invited lectures and 12 contributed talks. As talks were multidisciplinary and covering the different aspects of R&D in the field of tritium in fusion and fusion facilities, the School was aligned with the main objective of the TRANSAT project, that is considering “TRANSversal Actions for Tritium”. 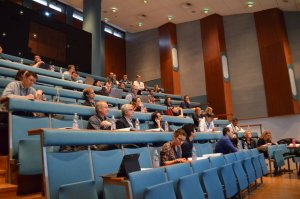 A 4-day programme based on tritium

Each day of the School was devoted to a specific topic starting with lectures from invited speakers who introduced the topic and research in this field before contributed talks. At the end of the day, a discussion session was organised.

The first day was dedicated to tritium management and detection. Attendees could learn more about tritium detection techniques, in what form tritium can be released from facilities, and how can we breed tritium in future fusion power plants.

The third day was addressing questions related to radiotoxicity, ecotoxicity and dosimetry of tritium in organisms. Experts talked about the hazards for the environment, organisms and humans when getting in contact with tritium as a low radiotoxicity element. Overall, all the talks gave a comprehensive overview on the problematics of tritium as a radionuclide for organisms and the environment.

The last day dealt with tritium waste and what are the French and UK strategies about tritium waste and how to process it. In addition, participants get the opportunity to visit the TRIGA reactor and the 2 MV tandetron accelerator at the Microanalytic centre. 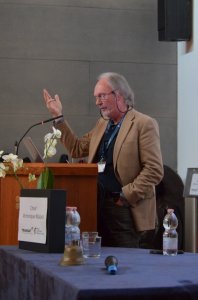 Richard Wakeford, from the University of Manchester, gave a presentation on “Epidemiological studies of tritium exposure”. 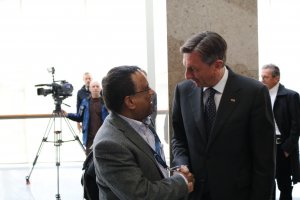 Awadhesh Jha (invited speaker at the TRANSAT Tritium School) and Borut Pahor (President of Slovenia) during the Stefan’s days.

[…] the successful First Tritium School, TRANSAT partners decided to keep the structure of the first school. They plan to organise five […]