Mickaël Payet is a young engineer who joined the TRANSAT project in March 2018 for 3 years. As a physico-chemistry engineer, he specialised in materials science by completing a master’s degree in research and then a PhD at the CEA research centre of Saclay (France). His expertise in materials science represents a great advantage for research activities carried out in the project, and more specially in Work Package 3 – Impact of tritiaded products on environment and human health.  This WP is dedicated to improving knowledge in the field of radiobiology, dosimetry, radiotoxicology, genotoxicology and ecotoxicology in case of contamination by tritiated products produced during the decommissioning of nuclear facilities.

Decommissioning activities generate fine airborne dust particles, namely aerosols. Consequences of a release of such tritiated particles in terms of radiotoxicology and ecotoxicology have never been studied. Partners involved in WP3 chose to work on steel (cutting contaminated pipes generates tritiated steel particles) and cement (cleaning walls contaminated by abrasion generates tritiated cement particles). As they could not have particles from real cases of decontamination, they decided to manufacture them, after having carried out a bibliographical study of the methods used. Mickaël’s goal is to produce particles very similar to those generated in decommissioning activities, and then characterise and tritiate them in order to be used by the biologists who will carry out future studies. 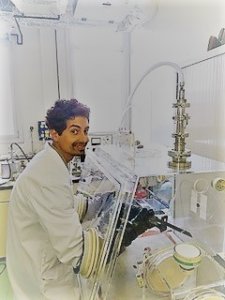 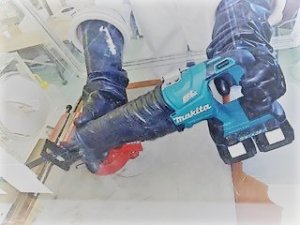 To do this, Mickaël developed in the IRSN aerosol metrology lab, a specific technique avoiding pollution by using a glove box where he installed a reciprocating saw for steel cutting. Aerosols emitted are characterised using an optical particle counter and by using scanning electron microscopy after collecting them on a filter. Thus, the size distribution and emission rate of the aerosol produced during the cutting of stainless steel can be measured. Moreover, the results obtained allowed to distinguish the steel particle production from the background particles produced by the operation of the saw itself without cutting a piece. This original method will be presented during the French Conference on Aerosols in 2019 (CFA 2019). Mickael is now performing the next step – the first tritiation tests-, at the Saclay tritium lab.

Post written by Véronique Malard from the CEA and TRANSAT partner